You can have any color as long as it’s black

I’ve recently been in the market for a new car and it’s been harder to buy one than I thought.  I have only two firm requirements:
1)  Excellent gas mileage: preferably a plug-in hybrid
2)  Cloth seats: the vegetarian in me just can’t abide buying leather seats
You’d think that would be a relatively easy set of criteria in (almost) 2013.  In fact, I’d be willing to bet that some careful market research would reveal that there is a fairly large overlap between vegetarians who prefer cloth seats over leather and people who care about carbon emissions and want a very fuel efficient car.  If we were to draw a Venn diagram, I’m sure there would be a large crossover. 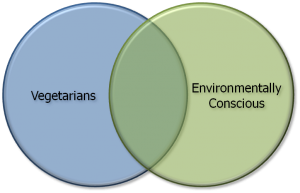 It was harder than I thought.  Just this week, I finally settled on the Ford C-Max Energi.  I test drove one of the non-plug-in versions at my local Ford dealership, went to lunch for 30 minutes and then returned to the dealership to place an order for the Energi.  The guys in the dealership ushered me into the “business office” where I sat down with the man who would help me configure my new plug-in hybrid. We sat down at an ancient computer terminal (with an even more ancient user interface) and proceeded to start configuring.
“The first thing I want,” I said, “is cloth seats.”  After a few minutes of staring at the computer screen, the operator turned to me and said, “We can’t do that.”
I figured it was just a failure of the user interface.  I had just driven a non-plug-in version of the car with cloth seats . . . and they are the exact same seats that go in the Energi.  I thought a brief conversation with the dealership or a quick email to Ford headquarters would reveal that of course I could order cloth seats or at least convince someone to simply move seats from one car to the other and I’d have a car in a couple of days.  No dice!  Even though it is physically possible, it apparently “impacts inventory tracking.”  Chevy and Toyota can do it.  Ford can’t.
But, the thing that cracked me up the most was the letter I got from Ford headquarters.  It instructed me to create an account on their site if I wished to make a suggestion … apparently email isn’t sufficient and then they informed me that they had “completed significant market research” to determine that no one wanted cloth seats in the car.  Or perhaps, they know that forcing people to create an account in order to submit a suggestion will reduce the number of suggestions they get.
In summary:
A beautiful car.
A terrible ordering system.
Inconvenient customer service.
Low flexibility in configuration.
I wonder how many they will sell?  Do any vegetarians have advice on car buying?